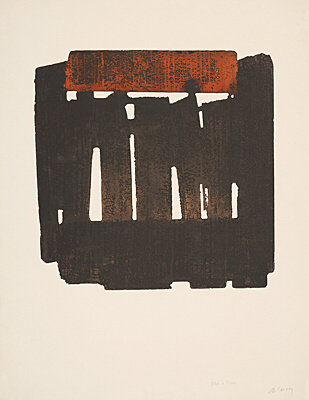 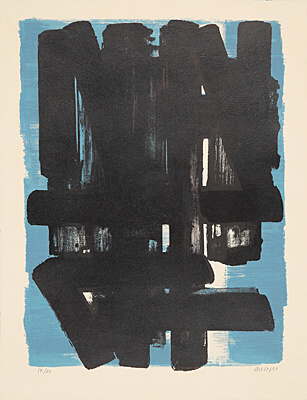 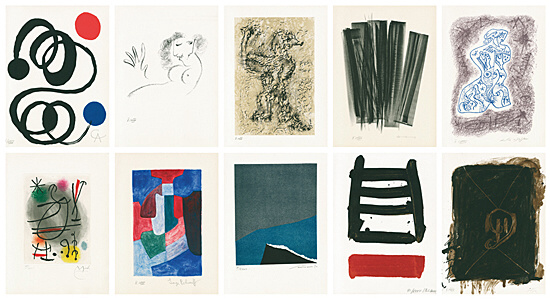 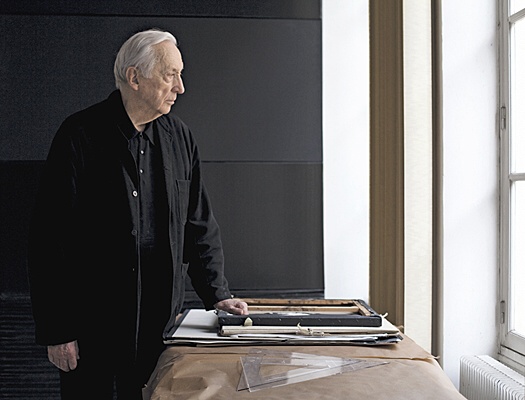 Pierre Soulages (b. in Rodez, France in 1919) is one of the most famous and important living French painters of our time, having turned ninety-nine on 24 December 2018.

In the distant past, he found sources of inspiration in Romanesque church architecture, as well as in the cave paintings of his hometown of Rodez in southern France. The special landscape and architecture, the stone and light of his homeland in Aveyron have had a decisive influence on Soulages.

Soulages has always been on the trail of light. He elicits it from the blackness. ‘Black is a colour of light. With its absorption and reflection, it creates contrasts. Birds make music, but people paint. The only animal that paints is man. People have been painting for thousands of years – predominantly in black.’ The formal language is reduced to the extreme. The techniques have changed – he used to work with oil paint, then with nut paint, later with tar and acrylic – but the search for light has remained the same.

In the meantime, it is undisputed that Pierre Soulages’s prints, with their great authenticity and expressiveness, have assumed a singular position in European art. Soulages, who appreciates the unexpected, considers his etchings to be completely independent works. ‘For these coincidences open up unforeseen possibilities of losing oneself in an unknown area, within which one takes the greatest risks.’ Very few printmakers who are keen to experiment have maltreated the copper plate to such an extent and treated it with acid like Soulages has done.

Soulages is also preoccupied with lithography. At first, he was suspicious of it because he regarded it as an artistic form that was too close to drawing and subjected itself to oil painting. In order to create innovation and avoid the one-off print (which would de facto be the ‘bon à tirer’), Soulages works on the edition as a whole. When using the lithographic stone, he adds changes in order to be able to introduce additional details. Each edition thus bears the identity of the artist. This calls into question the original work as such.