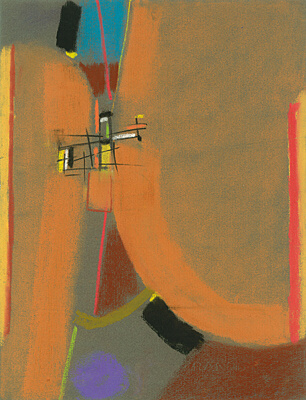 Max Ackermann (Berlin 1887–1975 Bad Liebenzell), a German painter and printmaker, was the most important representative of abstract, ‘absolute’ art in Germany and known as the ‘painter of the colour blue’. While his works were classified as ‘degenerate’ by the National Socialist dictatorship, he gained particular relevance after the war. His works were presented in solo and group exhibitions throughout Germany. Ackermann was one of the first members of the Deutscher Künstlerbund and participated in their exhibitions.

Typical of his work is the vertically oriented composition, which he saw as being analogous to music. Ackermann was of the opinion that only abstract art – like music – could grasp the essence of visible nature. In his visual language, he used the geometric forms of musical instruments and combined these to create surrealistic compositions. He later added further symbols, such as scales for the resting position, mirrors for the tension between real and visionary space, and towers for ascent.