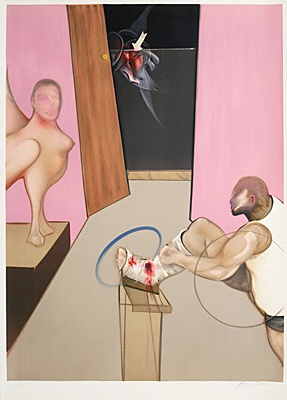 ‘...I am a very optimistic person.’ ‘I would like to celebrate life, and I always think I do. But then the neuroses of my century intervene, the neuroses of the time in which I live’, the Irish painter Francis Bacon (Dublin 1909–1992 Madrid) thus stated in an interview in 1991, shortly before his death. It is a statement that reflects Bacon’s contrary psychological and artistic dispositions.

In 1945, the triptych Three Studies for Figures at the Base of a Crucifixion (1944) caused a scandal; a large part of his subsequent oeuvre captivated the audience because of the artist’s unique painting technique, but above all because of the works’ immediate and often violent expressiveness. The abysmal, harrowing paintings stand in contrast to the gentleman and well-read Bacon with his correctness, who by no means had the intention of depicting only the dark side of human existence. ‘I am merely concerned about life is general.’ And for Bacon it is a life with ‘a great deal of war’: As a child, he experienced the First World War; as a teenager, he suffered under his homosexuality – which he later continued to call an ‘affliction’. He served in the Second World War as a paramedic and rescued victims of the bombing raids on London. He twice lost a lover after a long relationship: first Peter Lacy, then George Dyer. He lived a life in excess between his studio, bars and casinos, between sadomasochism, drug abuse and alcohol consumption, but always maintained his unusually sharp mind and great sense of discipline with regard to his artistic activity.

Francis Bacon was a painter. Nevertheless, he decided – presumably in the early 1970s – to have lithographs and etchings of his paintings produced in limited editions at the same time as or shortly after they were created. With his personal signing and numbering of these prints, he underscored his esteem for these lithographs, aquatint etchings and offset lithographs.

Isolated in the centre of many of his works stands either an animal, a cadaver or a portrait; but it is mostly the human creature, which, in its often crippled, torso-like and bloody, fleshy appearance, becomes an expression of extreme violence, sexuality and fateful existence. In spatial structures that cannot be clearly defined, scenes full of dynamism, blurriness and partial unrecognizability unfold, which, even the famous triptychs, rarely have a narrative character, but rather reflect individual facets of Bacon’s reality.

The convinced autodidact Bacon dealt intensively with the history of art. When he saw an exhibition of works by Picasso in Paris in 1927, he was deeply impressed by his classical drawings. Works of Expressionism, Surrealism, Romanticism, the late Goya, Michelangelo and Rembrandt are all also reflected in his work. Photographs, such as Muybridge’s movement studies, images of athletes, friends, lovers or himself, are also incorporated into his human studies.

Despite all art historical references, his oeuvre remains singular with regard to both technique and contents. From the beginning of his career to the present day, Francis Bacon’s oeuvre has induced fascination across generations. His works may shock many, but at the latest after closer examination they touch in their ruthlessness on the existential humanness deep within us.