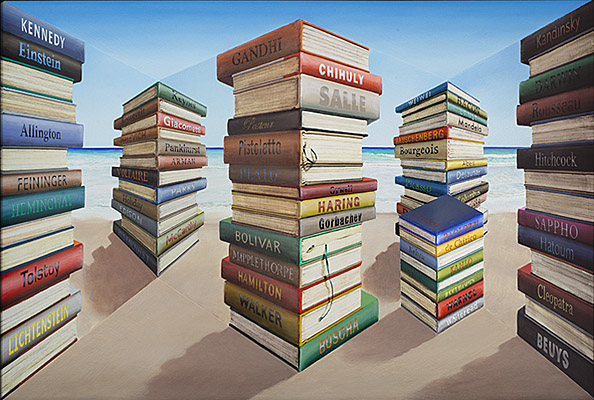 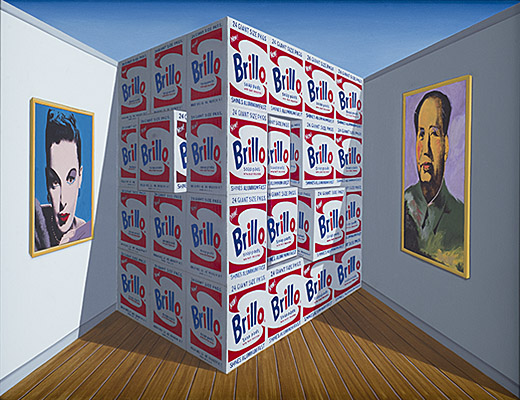 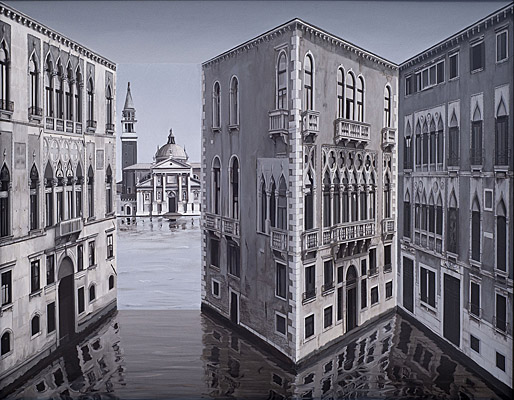 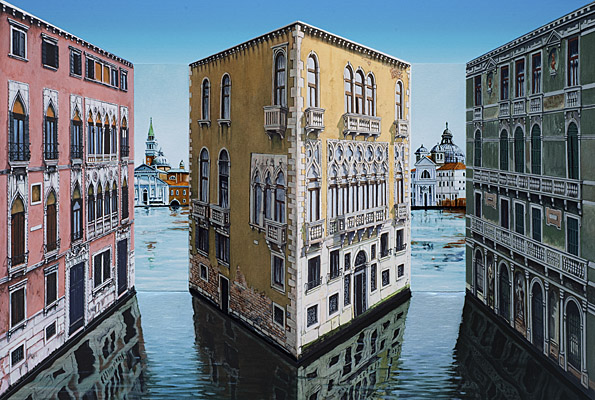 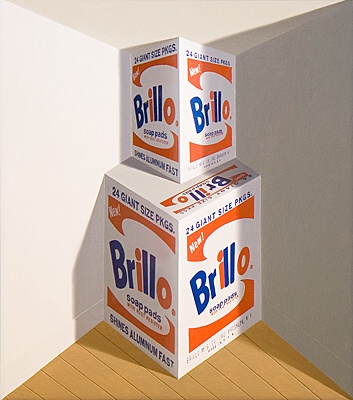 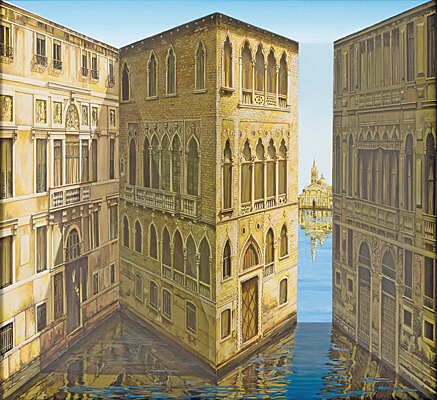 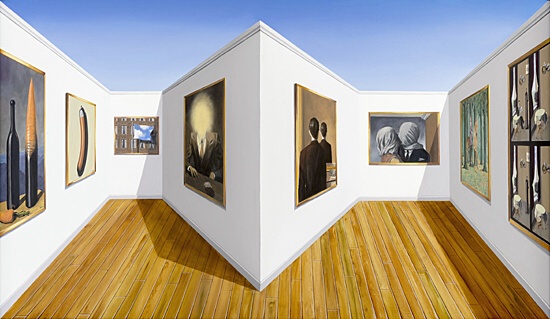 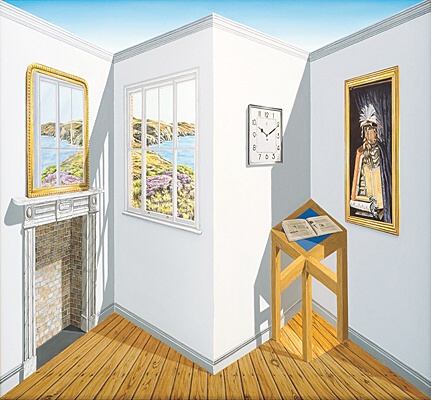 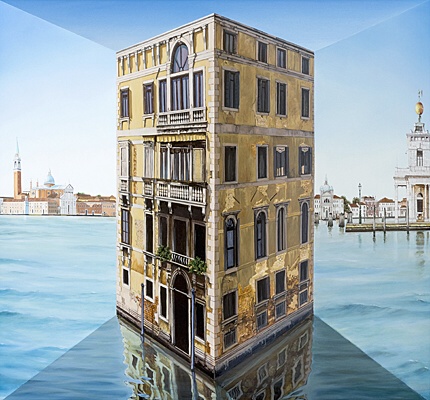 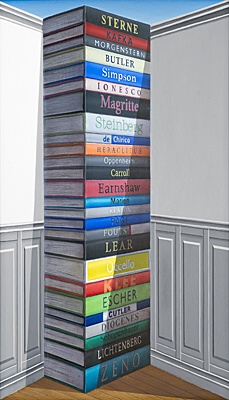 "We Are All Surrealists Now" 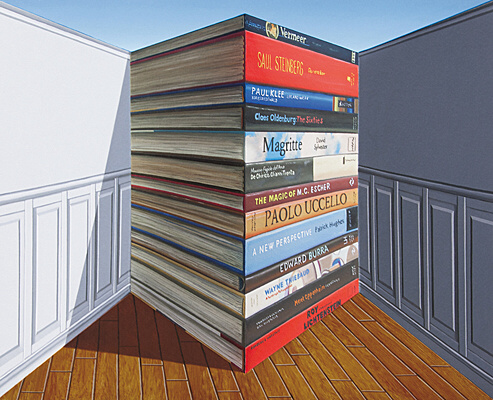 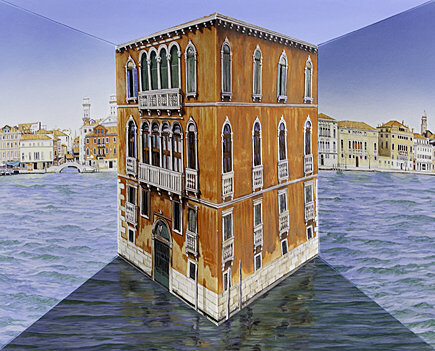 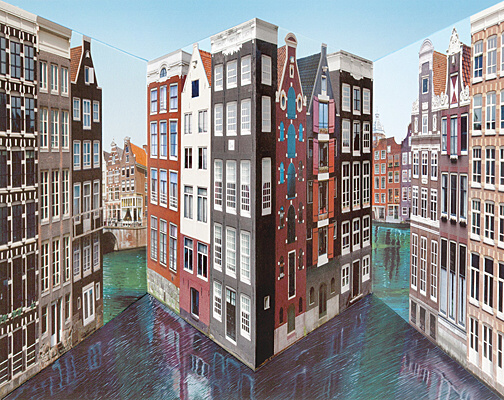 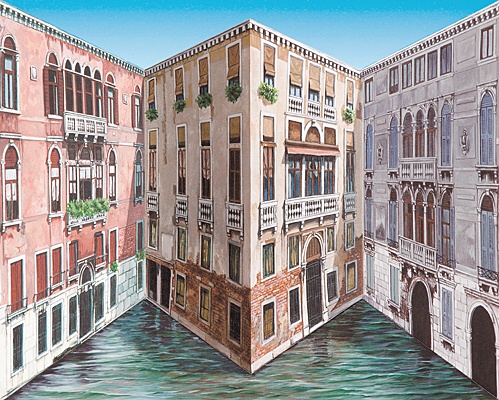 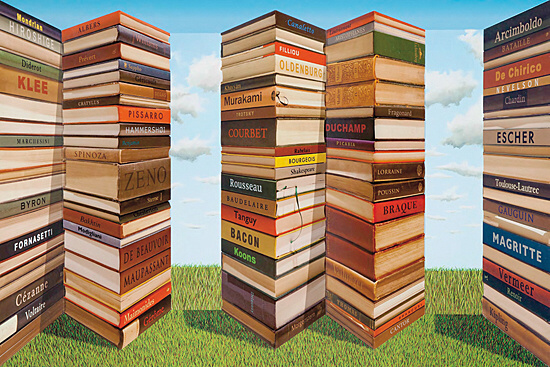 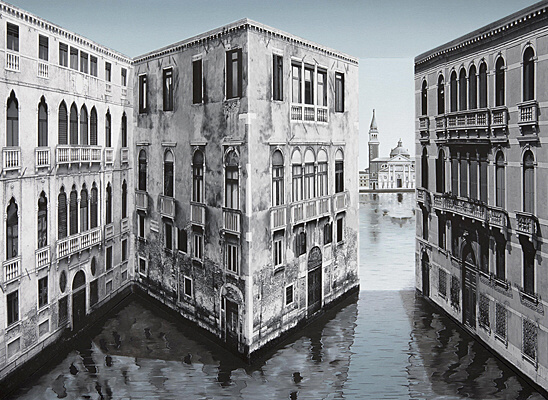 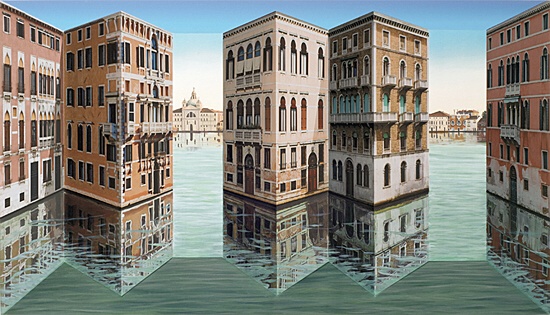 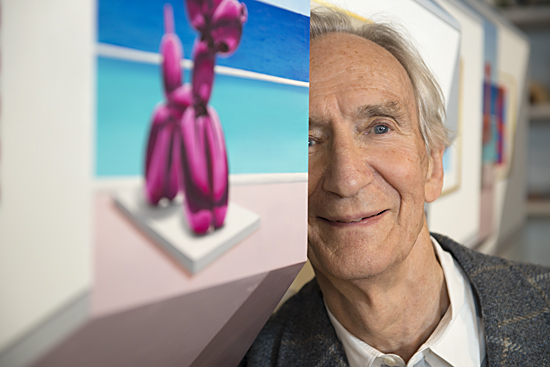 At the young age of three or four, whilst staying at his grandparents’ house in Warmingham Road, Crewe, Patrick Hughes would sleep in The Glory Hole – the cupboard under the stairs. Lying awake listening to the air-raid sirens and falling bombs, Patrick would look up and stare at the stairs. "We were looking up at these stairs the wrong way round – up and down, up and down – stairs that only a fly could walk up. It must have made a strong impression: being bombed and in the dark and sleeping with my mother and seeing everything the wrong way round.” Patrick has made a life-long career out of doing things the other way round.

Patrick Hughes was born, Peter David Hughes in October 1939 in Birmingham, the eldest son of Peter and Florence Hughes. His father was a commercial traveller in groceries and a salesman, and his mother a housewife. The family moved around, living in suburban Hayes in Middlesex and later in Hull. It was an unhappy household, a quarrelsome and hostile environment. Patrick’s refuge was in books and in his imagination. Books came from the public library as his was a book-less house. "A book is a way out…” says Patrick, "…they are like little doors – you open the little hinged rectangle of the book and step out. I escaped from my suburban hell hole of an upbringing through the book.”

In 1950 Patrick went to Hull Grammar School where he did ‘O’ level art, taught by Ian D. H. Fothergill. Fothergill encouraged the students to write about modern art and Patrick wrote in defense of Picasso. But it was Fothergill’s set designs for the school plays, with their use of perspective and painted shadows which amazed Patrick and left a lasting impression.

At seventeen Patrick left school, home and Hull, for London, never to return. He took at job as a window dresser and salesman at Rubans de Paris in London’s West End, near to the Portal Gallery. He spent his spare time reading and writing and visiting local galleries, looking at works by René Magritte, Marcel Duchamp and Paul Klee and taking in the contemporary scene. The following year, Patrick met his first wife Rennie Paterson, then an art student at Reading. Three sons, John, James and Solomon, followed in quick succession and Patrick and Rennie returned to live with her parents near Leeds.

In 1959 Patrick enrolled at the Leeds Day Training College to study English literature with a view to teaching English and a writing career. On the first day, asked to write an essay on six books he had recently enjoyed, Patrick wrote about N. F. Simpson, Eugène Ionesco, Franz Kafka, Lewis Carroll, Samuel Butler and Christian Morgenstern. But according to Mrs. Hanson, the English teacher, this was not English literature. English literature was the nineteenth century writers, the Brontës, George Eliot, Jane Austen and Charles Dickens. She advised him to study art instead. So Patrick’s art career began out of acts of rejection and suggestion, not through intention.

The Art Department was run by Muriel Atkinson and John Jones. They encouraged creativity and experimentation. Patrick began making low reliefs in plaster. Then he began making cut-outs in paper and wood. Painting white emulsion paint as the ground and using household gloss paint as the finish. It was a surprise gift from John Jones for his twenty-first birthday – a subscription to Art News and Review – that stimulated Patrick to send off slides of his work to the Portal Gallery in early 1961. Later that year, on the Monday after the Friday when Patrick completed his course at Leeds Day College, he had a highly successful solo exhibition at the Portal Gallery, London. It was the first one-man show by a so-called Pop Artist.

The critics of the day George Melly and David Sylvester were early champions. Sylvester wrote, "This artist has the gift, synonymous with creativeness, of being able to be surprised by what the rest of us take for granted. Here is a painter who really has something to say, and his arrival on the scene gives me a rare sense of exhilaration.” Parallels were drawn with the works of Harold Pinter, Paul Klee, Samuel Beckett and Spike Milligan. Patrick sold two-thirds of the forty or so paintings exhibited.

With the success of his Portal Gallery show in 1961, Patrick’s job moved from schoolteaching to art lecturing at Bradford School of Art in 1963, and then in 1964 at Leeds College of Art. Patrick’s colleagues included the artists Anthony Earnshaw, Robin Page and George Brecht, and his students – Trevor Winkfield, Glen Baxter, Les Coleman, Jeff Edwards, Les Evans and Paul Hammond. It was whilst at Leeds, that Patrick made two of his seminal works, Infinity, 1963, inspired by standing on the railway station at Leeds and looking at the railway tracks, and his first reverspective, the Sticking-out Room of 1964. In 1968–69 Patrick was giving lectures about paradoxes and jokes in Exeter and London and Leeds with George Brecht, the Fluxus artist. Several years later, in 1975, they were to collaborate on Vicious Circles and Infinity, A Panoply of Paradoxes, the first ever book on the paradox. It has sold 100,000 copies and been translated into Japanese, German, Dutch and Spanish.

Around this time, Patrick began painting vicious circles and versions of the ouroboros in search of a theoretical basis for his ideas. He had moved his family back to London and commuted to Leeds to teach.

In 1970, Patrick was one of ten artists invited to take a room at the Institute for Contemporary Art in London. He constructed a 12ft x 8ft sticking-out room within the room – a large paradoxical object, which visitors could not just look at but could experience for themselves. That same year Patrick met Angela Flowers who was about to open her own gallery. He was chosen as her first artist to show and he has been showing with Angela Flowers to this day.

The first half of the 1970s saw Patrick living in Chelsea and Ladbroke Grove and painting rainbows. The rainbows became very popular as prints, which he made with Coriander Studios for Christie’s Contemporary Art and as postcards for Camden Graphics. Over the years about 1,000,000 rainbow postcards and 10,000 screenprints have been sold. People thought the rainbows were cheerful. But Patrick felt they were misunderstood; they were acts of subversion, visual puns. His interest lay in the contradiction of turning or fixing an experience or event into a solid thing.

In 1975, sustained by his sales of the rainbows and his book, Patrick moved to St Ives and leased a studio with a ladder down to the beach. It was here he made On Reflection: St Ives Bay. In 1979 he left the village of St Ives for the village of the Chelsea Hotel in New York, another artists’ colony where he started to write More On Oxymoron. He hung out with the artists Keith Haring and Kenny Scharf, the musician Klaus Nomi and the theatre director Charles Ludlam. It was whilst in New York that he began to work entirely on paper as he found he could get more ideas down faster. Patrick returned to London in 1983 and stayed at the Chelsea Art Club and had a studio in Notting Hill Gate for a short while. After showing at Angela Flowers Gallery that year, Patrick decided he needed to change his method of working which had typically involved a slow gestation with months of thinking, a few days of making, and a few minutes of contemplation by the viewer. Moving again, this time to a squat in Thornhill Square in North London, with his son James Heartfield, Patrick began painting small watercolours, usually three a day. This technique liberated him to have lots of ideas and variations on themes. Motifs included the crucifix, skeletons, eggs, yin and yang, and shadows, amongst other ideas. He made hundreds and sold most of them. This change enabled Patrick to see where he was going and what really interested him.

When Patrick moved to Belsize Park in 1985 he went back to painting on canvas but in oils. In pictures like Self-Criticism he began to look at the relation between representation and reality. He re-examined the rich vein of the old Sticking-out Room of twenty years earlier, he explored reverse perspective, shaped boards and used all kinds of imagery.

In 1987 Patrick met and married his third wife, the historian and writer, Dr. Diane Atkinson. Together they moved to East London, which is where they live today.

2011 marked Patrick Hughes’ Fifty Years in Show Business; to coincide with this half century, Patrick had a major retrospective exhibition at Flowers Gallery, London. Also published his third book on the paradox and oxymoron, Paradoxymoron. In 2014 Patrick was awarded an honorary degree from the University of London’s School of Advanced Study, in recognition of his outstanding contribution to education and research. His artworks continue to be exhibited worldwide, including recently in America, Europe, Japan, Korea and Switzerland.

Busier than ever in 2015, Patrick is featured in the continuing touring group exhibition Visual Deception II; Into the Future in Nagoya, Japan. Op Art - Kinetic - Light in the Würth Collection. Josef Albers and Vasarely to Patrick Hughes opens in May at Museum Würth. Imminent solo exhibitions include Winsor Gallery, Vancouver opening January 2015.